As term started, teachers were pleased with the resources and reported the lessons were going well and they felt students were engaging with the articles, but Michael reported that teachers and students were nervous about the discussion and students had asked whether they could do a debate instead. He suggested an extra preparatory lesson immediately before the discussion where they could practise discussing and preparing four different aspects of the main question in small groups. I agreed to run one of these sessions and also to map the final discussion for this group. Unfortunately the other discussions occurred on a Saturday when I was unable to leave the library due to other commitments. I produced a rubric for marking the discussion, and sent out links to two of Alexis Wiggins’ videos – one for staff to share with students to explain what we were about to do, and one for staff to watch to help them understand what they were looking for.

The preparatory lesson turned out to be vital. Students suddenly began to understand what they were being asked to do, and what their individual roles were. They were excited about the task and now had some idea of why the task itself was going to teach them some immensely important skills. In the discussion itself, they blew us away! Eleven sixteen-year-old students talked intelligently and respectfully for 35 minutes with no intervention at all from an adult about the topics they had been studying. They listened carefully to each other, responded to each other’s points and did not interrupt. More vocal students invited less vocal into the conversation and everyone had an important contribution to make. With 5 minutes to go we popped up a “conclusion” slide on the board and they brought their discussion to an orderly conclusion, with everyone having a chance to voice their opinion. I mapped the whole discussion (using blue for the first 10 minutes, green for the middle 15 and red for the final 10), and then we sat around the table and marked it together. An important feature of Spiderweb discussion is a negotiated group grade, and they ended up giving themselves a B+. The map gave them an overview of the discussion, with notes about how often articles were being referenced and key vocabulary used and was an excellent starting point for this reflection stage. Michael made notes on the Economic content of the discussion to feedback during the next lesson on any terms or concepts that they needed clarified because they were not using them quite correctly. 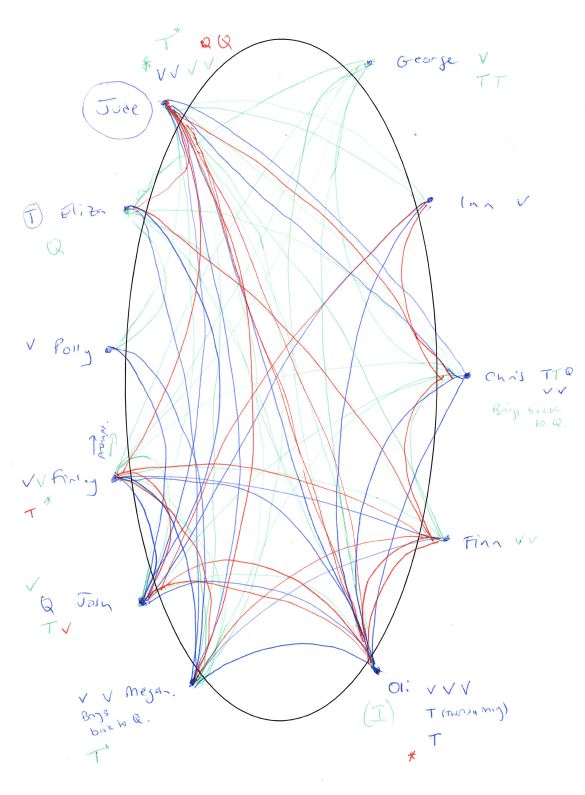 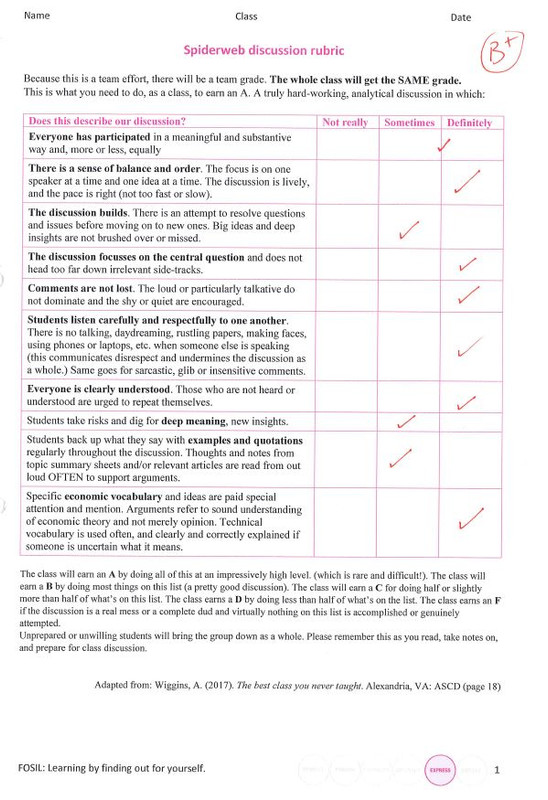